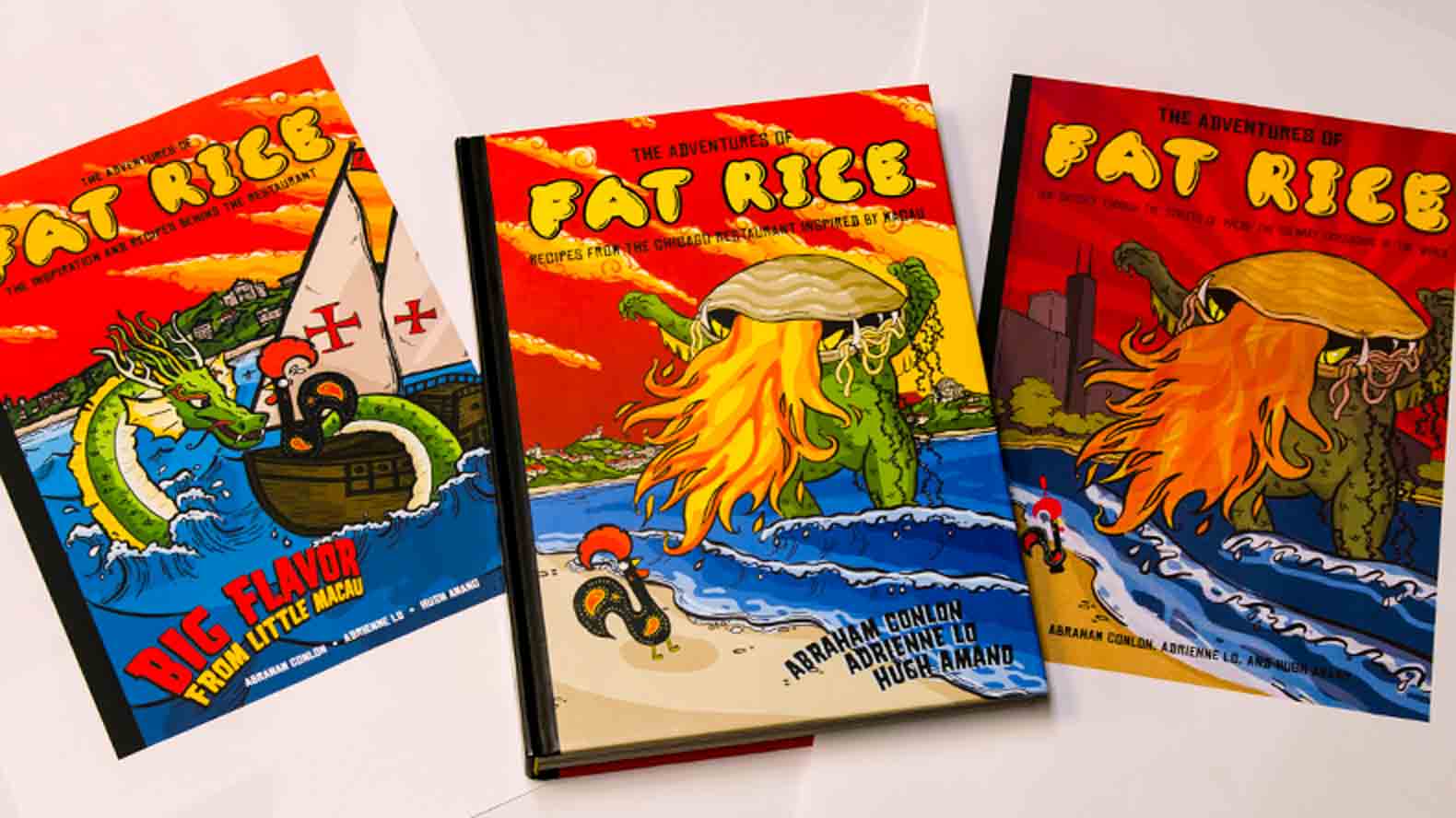 One of the bigger surprises for most cookbook authors is that the publisher has the final say in picking the book’s title and cover. That said, publishers want their authors to be happy about the end result, so are motivated to collaborate with them. For a book like this, where the authors had very strong opinions about every detail, especially design, it had to be a group decision.

In the end, the title decision was a fairly easy one; they went with what the Fat Rice team proposed in the beginning.

“This was the rare book where the title was in the proposal,” Timberlake says. “If we like the title of the book at proposal stage, we keep it. Coming up with titles is the hardest part of the process.”

The cover image proved to be a little tougher to nail down. They liked the original chilli clam sketch from the proposal, but debated the details. Becan sketched out a few options to review.

“The point of the chilli clam poster was to create a dialogue,” Conlon says. “It’s based on our dish that we serve with a giant monster of a clam, and noodles, spicy, and all these things. The poster is the personification of the dish. I wanted to use this fun imagery to initiate this conversation about some of these difficult-to-explain dishes like that, and it worked as a cover.”

“The cover design was so easy I couldn’t believe it,” Collins says. “We did debate it, but it’s usually more of a struggle. I wanted the cover to have the original design, which had the chilli clam attacking the skyline of Chicago and Abe wanted the clam to attack the skyline of Macau. I was all, ‘This is a book about a restaurant in Chicago it’s not about Macau,’ and he’s all ‘I will not offend the people of Macau!’ and I was all, ‘Then let’s not have a chilli clam coming out of the ocean attacking their city on the cover!’ I totally lost. But it’s better than a Chinese dragon attacking a sweaty galo on a 16th century Spanish ship off the coast of Macau.”

“There was some back and forth,” Timberlake notes. “We wanted to make sure it was fun and irreverent and matched the tone, but the book is in honor of the Macanese home cooks, so it also needed to reflect Macau. Abe and Adrienne were concerned that it would come off like they were making fun of it or being flip; they were a little worried that the Godzilla chilli clam was offensive. To us, it was fun and playful. It’s so eye-catching.”

“We all saw that image, and were like, that is totally the cover,” Plikaitis says. “It’s funny and whimsical and speaks to what we’re trying to convey, and we loved it. It did take some convincing of the team, but this stands out. It’s different.”

“We all saw that image, and were like, that is totally the cover. It’s funny and whimsical and speaks to what we’re trying to convey, and we loved it.”
Kara Plikaitis, Ten Speed Press

After the team agreed on a cover, there was one more group to hear from: the people who need to sell the book to booksellers. Fortunately, they liked what the team had decided.

“We showed it to sales, and they loved it; they were not willing to let it go,” Timberlake says. “You can see that book from 20 feet away, and you have to pick it up, out of curiosity if nothing else. We just got the latest issue of Bon Appetit, with their fall cookbook picks. Front and center is The Adventures of Fat Rice. It's a cover that sticks in peoples' hearts and minds.”

With all the pieces coming together, Timberlake and Ten Speed’s copyeditors went through the book, questioning every word and punctuation mark one last time.

“Copyediting was hell; absolute hell,” Collins says. “All of my authors struggle with it but they struggled more than most. I think copyediting comes as a huge surprise to chefs no matter how much you prepare them.”

“Early in the process, we do a developmental edit; I point out the big picture and structural issues and ask them to refine those,” Timberlake says. “Then a copy editor does a deep line edit, making sure ingredient lists are in order, checking spelling and grammar. After copyediting, it went into design, and we make more changes. Then we have a proofreader review it.”

“Seeing the edits was intimidating,” Amano says. “To see someone catch things you went over a hundred times is rough."

“The book evolved and it changed as we were doing it, up until the very end,” Conlon notes. “When you first start out, you want to say all this stuff. But through the editorial process, the things that were most important to you to say are gone, and it’s fluffy. Then we had to go back through and say, ‘No, we need to drop this, and say this instead.’ And continue to tweak and change things so it met with our vision. A lot of times things get diluted and editors pick and choose for what they want to convey, but from the beginning, I was like, ‘This is not your book, this is the Fat Rice book. And this is what Fat Rice needs to say.’ But that was the great thing about Ten Speed; once they saw we were confident and committed to that, they let us do our thing.”

All the changes, extra photos and illustrations meant that the book went over, in both pages and time.

“The only argument Abe and I ever got into was about the deadline,” Collins says. “The book goes to the printer in May, and there’s no changing that. At a certain point, the only real extension is to push the book back a season and publish it in Spring 2017. I couldn’t get permission for much else other than an extension of a couple of weeks.”

“Yeah, we went over,” Conlon acknowledges. “They guaranteed us 280 pages in the beginning. Then we were like, we need 300 pages. Now it’s a 320-page book. We had to push for all the stuff to get in there; it could have easily been a 500-page book. There was some back-and-forth for what we wanted to get in there."

“When we went up in page count and added another 32 pages, we had to go back, re-evaluate the P&L, and see if sales could support the cost increase,” Plikaitis says. “It affects the bottom line. But in the end, the material was worth it.”

Not everything made the final cut.

“We were going to teach you how to hack your oven,” Conlon says with a laugh. “They were all about that idea, but we threw it out because it would have increased the book size and the workload more than we were comfortable with. It might be something we explore in the future. There are some hacks we have that are not the most safe.”

"We had another hack with a coat hanger," Collins sighs. "I was afraid someone would get electrocuted." 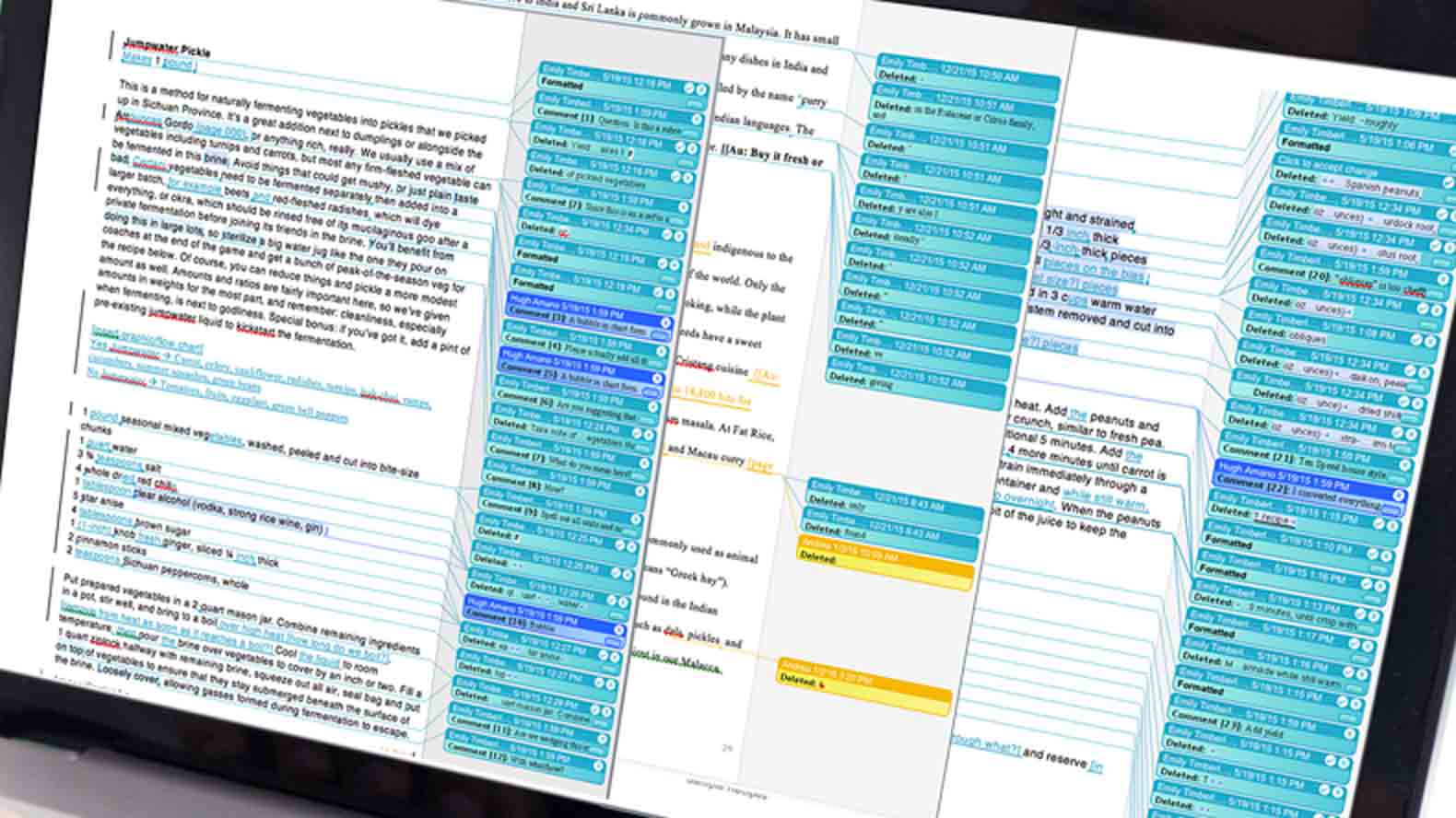 A look at the copyediting process.

When you pick up a cookbook, if you flip to the back, you’ll read quotes from people telling you why the book is great. Those quotes are called blurbs in the publishing world, and they are important. Sometimes the blurb is the thing that sells you on the book. An endorsement from a chef like Mario Batali or Thomas Keller saying that this is the book to read if you are into cooking says a lot, especially if the author isn’t known nationally. It makes you think the biggest names in food know the people who wrote the book, and are putting their personal stamp of approval on it. Although I learned that was not always the case when at a party with Daniel Boulud, and a fairly successful cookbook author introduced himself to Boulud by thanking him for blurbing the author’s latest book. Boulud nodded vaguely, and smiled, seemingly without any idea of what the author was talking about.

“For a book like this, people are taking time out of their busy lives to endorse someone else’s work,” Timberlake points out. “These aren’t short books—it takes time. I try to be really respectful of their time when asking. They are doing us a huge favor.”

As the team at Ten Speed prepared to send the book to the printer, they had secured blurbs from Rick Bayless, plus a less-known culinary expert: Kool Keith.

If you aren’t familiar with Kool Keith, Wikipedia describes him as “An American rapper from The Bronx, known for his surreal, abstract and often profane or incomprehensible lyrics.” He raved about the book, calling it a “must-have for home (and Jupiter) chefs." It wasn’t exactly a promo from Martha Stewart, but it vibed perfectly with the book.

“I asked Abe to come up with a shortlist of five to six people to approach to blurb the book," Timberlake says. "He gave me a list that included Kool Keith. I was like, ‘Wait—do you actually have a way to get in touch with Kool Keith? If so, obviously, we have to do it.’ And he did, and Kool Keith was super-friendly and punctual. So, I checked that off my professional bucket list. Blurb from Kool Keith: done. "

Getting the Advance Copies

After a book is written, photographed, recipe-tested, edited, re-worked, re-edited, color-corrected and basically prodded to death, it’s sent to the printer. And then you wait. Almost every book is printed in China, which adds months to the process. So after you do all that work, after you finally hit send, after everyone has compromised on what they could stand, fought for what mattered and then gone out for drinks to make up for the fighting, you wait. Because your book, your baby, is literally on a slow boat from China. The Fat Rice book went to the printer in late May, and the first copies came in from the printer in August.

“There was jumping up and down and running around the office when the first books came in,” Timberlake says. “This was the first time we were seeing the whole thing bound, so we could see all the little details: the spot gloss on the spine, how the color on the cover reproduced, how beautifully the art jumped off the page. It wasn’t a surprise, but we were like, ‘Yeah! That color really does look good!’ I love it. It’s a substantial book; 320 pages. It’s chunky in the best possible way.”

Timberlake overnighted copies of the book to the team in Chicago.

“That’s probably the best part of the job, when you send it to them for the first time. You get the calls and emails and texts from everyone, the Instagram posts. It’s great; the book is finally a real thing.”
Emily Timberlake, Ten Speed Press

“That’s probably the best part of the job, when you send it to them for the first time,” she says. “You get the calls and emails and texts from everyone, the Instagram posts. It’s great; the book is finally a real thing. It's this beautiful representation of the restaurant, a postcard of Macau.”

“It was a relief,” Conlon says. “I was over it. I didn’t even look at it. I’d seen it a thousand times at that point. As we look through the book, it’s like there’s nothing here. It’s the first two years of the restaurant. It’s real, but we’ve grown beyond that. What we have now is exactly what I wanted from the beginning. This isn’t just a Macanese cookbook. This is the Fat Rice cookbook.” Next