The culinary identities of Japanese, Chinese, Korean, Vietnamese and Thai menus couldn’t be more different, but until recently, many American iterations of East Asian restaurants shared one thing in common: lackluster dessert menus. Asian dessert offerings were dominated by repeat hits like green tea or chai ice cream, mochi, cheesecake and sorbets, or neglected entirely, dessert was lost while savory starters and mains captured diners’ attention at casual Asian restaurants. Even fine dining concepts were prone to French-leaning and seasonal pastries that just didn’t quite match up to the talent displayed on the savory side.

But that’s changing. Pan-Asian, once a catchall term for contemporary Asian fusion, has become as irrelevant as New American to describe the vast array of emerging culinary sects from Japanese farmhouse and Latin-Southeast Asian to hyper-regional destinations like the Chinese-Portuguese flavors of Macau. In the ways that Asian-American cuisine once had a bad rap for pandering and white-washing flavors, an influx of second- and third-generation Asian chefs are creating their own version of authenticity. Straddling dual identities, pastry chefs are finding that cross-cultural mash-ups are proving to be more than technique; it’s about reshaping attitudes toward dessert on both ends of the spectrum.

So, how did green tea ice cream become the norm anyway? For one, dessert menus aren’t exactly an authentic part of the East Asian restaurant experience. Those lackluster dessert menus? Distinctly Western.

“[In Japan], you typically don’t eat dessert in the restaurant you’re eating in; you go to a dessert shop. You wouldn’t ask for a dessert in a Korean barbecue restaurant in Korea,” says Sang Yoon, chef-owner of Southeast Asian restaurant Lukshon in Los Angeles. “From a contextual standpoint, they’re trying to satisfy Westerners.”

A wedge of fruit is more likely to show up at the end of a meal than an elaborate dessert at restaurants in Asia, which helps explain why fruit dominates most Asian sweets. Along with tailoring the dessert experience to American customers, operators have also had to play it safe with offerings.

“Most Westerners don’t understand about Asian desserts. Shaved ice, for example—no one understood that until a few years ago. [It was] just putting beans in desserts,” Yoon says. “At Lukshon, I have to please the people of Los Angeles. So I try to bring them things that are different, reframe things in a way that is comfortable, palatable for them, that doesn’t scare them.”

Context is everything. Texture plays a huge role in traditional East Asian desserts, specifically gummy, chewy, gelatinous and non-dairy milky flavors that are less familiar to many Westerners and don’t carry the same wow-factor presentation of ornate French pastries. Despite the longstanding presence of mochi and boba cafes, it’s still a hard sell to timid diners. Even ubiquitous ingredients like avocado, something Yoon’s Angeleno customers should be well-acquainted with, suddenly becomes unfathomable when presented as a cold, sweet smoothie.

“It’s not savory, it’s not a health drink—it’s dessert. How do you sell that to someone? If I sell avocado toast, people will buy it. If I put it in a drink, people won’t,” he says. “You need to recontextualize it, finding ingredients in a way that makes things unique that isn’t as simple as just replacing ingredients.” 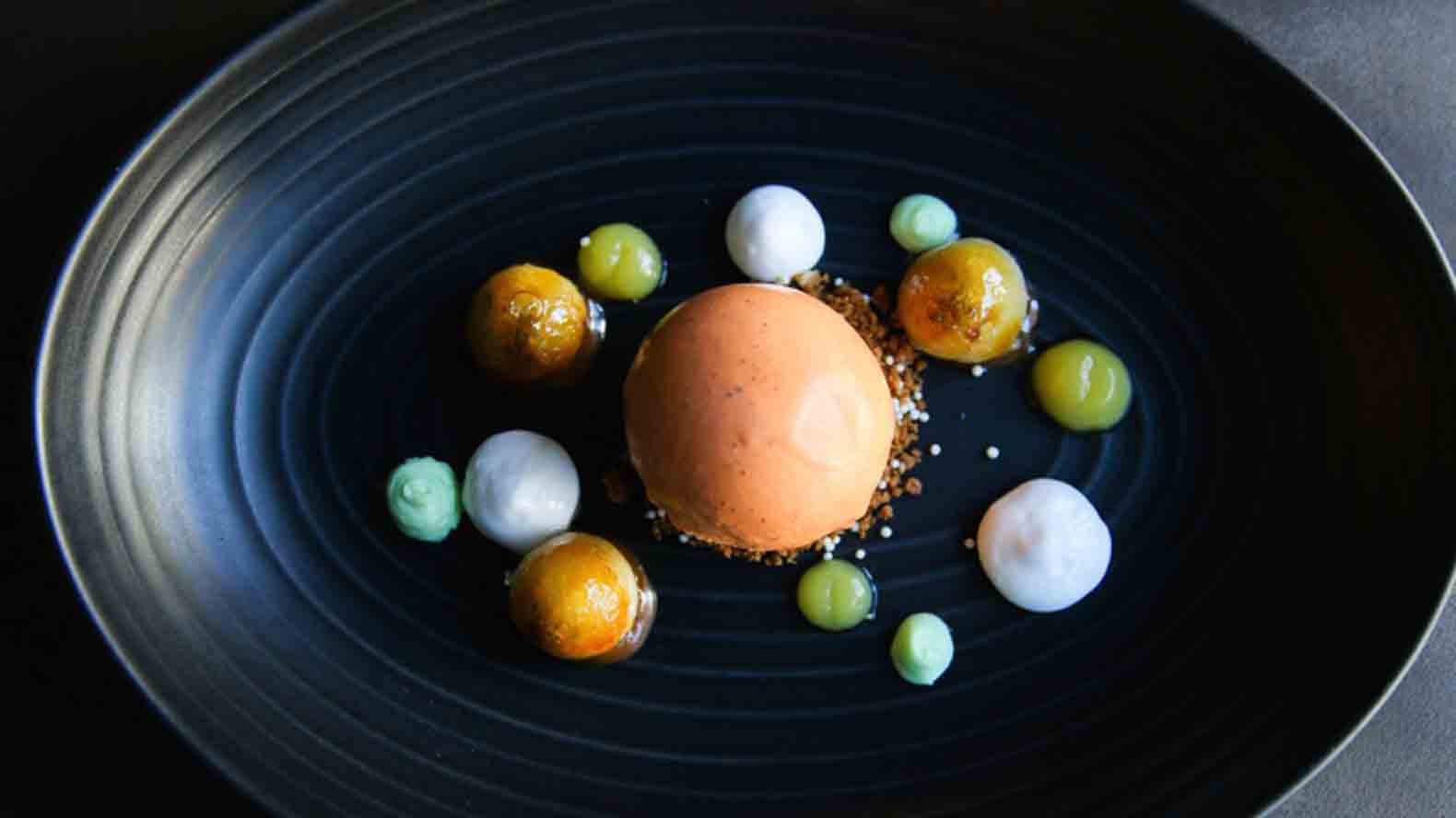 Bridging the gap between authenticity and innovation is a constant struggle for many chefs who want to represent flavor profiles with a cultural attachment. That can prove even more challenging for second- and third-generation Asian-American pastry chefs, who are not just reinventing flavors but introducing new desserts to two different cultures at once.

“To me as a chef, it’s not just about appealing to customers. It’s about appealing to these two parts of me,” says Melissa Chou, pastry chef at Mr. Jiu’s in San Francisco and a second generation Chinese-American. “After cooking in an Italian restaurant or a French restaurant, you kind of want to cook the food you grew up eating. It’s a really fun challenge to appeal to a Chinese diner and an American diner with no context of Chinese food.”

Chou’s cross-cultural ode manifests in the form of sesame cake with young ginger mousse and fuyu and hachiya persimmons, and black sesame cake with rosebud mousse and strawberries. Yet despite the fact that Mr. Jiu’s is in San Francisco's Chinatown, in a city that is home to a densely populated Chinese community and adventurous diners, she still searches for footing with customer acceptance. Her favorite—a play on sesame balls with red bean paste, caramel sauce and sesame cream—turned out to be a flop. As was her boiled sweet dumplings with glutinous rice skin filled with quince paste served in hot ginger broth, just didn’t take off.

“It was a difficult one," she says. "I think Chinese people knew exactly where it came from, but it was just a little bit too strange for Westerners. So it was kind of sad that one didn’t quite work out."

Figuring out what sells is only half of the challenge. Pastry chefs are also faced with the legwork of learning savory techniques from other cultures, then translating them into a manageable working scale for a restaurant. “There are some techniques in Chinese cooking that are different and I am learning about as I go because I’ve never cooked Chinese food before,” Chou says. “It’s not that these recipes were passed onto me from generations ago. I imagine that other pastry chefs do that, too; looking at the way mochi or dumplings are made and trying to figure out how those techniques can apply to pastry.”

Japanese cuisine is a new area for Ariana Quant of Uchiko in Austin, Texas. The Chinese-American pastry chef spent most of her career training with French techniques. After playing around with mochi, Quant created a lemon cake component of a cream fraiche panna cotta with blueberry compote and lime sorbet that imparted the familiar textural gumminess without taking the expected shape of a translucent shell over a scoop of ice cream. “Japanese really love rice flour and mastered it,” she says. “I’m still learning about Asian ingredients and integrating into this library of these styles I do.”

Destination restaurants like Lukshon and Uchiko have the incentive to elevate their dessert offerings to match the main menu, where diners are more open-minded and likely to stick around for a last bite. But much like Chou’s trial-and-error at Mr. Jiu’s, there are still limitations to what will fly with customers. To figure that out, pastry chefs rely on two methods: substituting Asian flavor profiles into something familiar or retooling an authentic dessert to seem more approachable. As is the case with introducing any new idea to the plate, the latter is obviously more challenging.

At Lukshon, this plays out in dishes like a sundae with Thai tea ice cream, black tea caramel, pandan leaf, jackfruit and whipped coconut. Pandan leaf, in particular, is a secret weapon Yoon loves to work with: a perfumey ingredient typically indicated by a “super bright, Hulk green” dye at markets in Vietnam. The artificial coloring is more authentic, but noticeably off-putting. Yoon has tried dying the desserts as a gel like the Vietnamese and not dying it, hiding it as a custard or doughnut filling. But repeatedly offering it creates a starting point for people to understand and reference an unfamiliar ingredient. 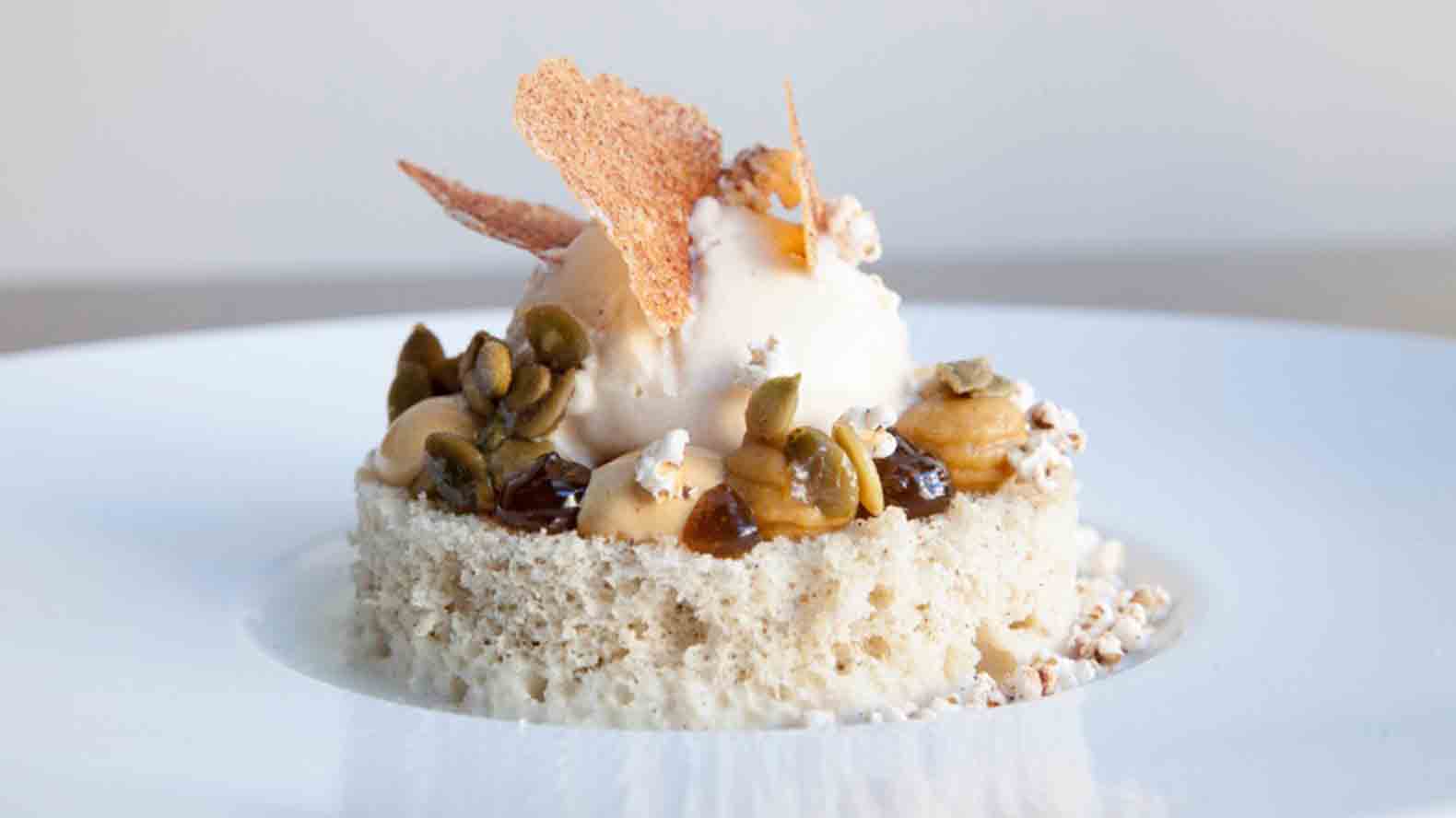 “When we think of dessert, we think of comfort foods, so that’s why desserts tend to stick into those familiar realms,” he says. “No one knows what it is any way. The only way people would see it is as a dye, so it can become a reference point for when they see it. People do always ask: What’s that green thing?”

On the flipside of these limitations, there is surprisingly more freedom. Pastry chefs are not bound by tradition because it’s entirely new territory. Working at Entente in Chicago, pastry chef Mari Katsumura is able to draw upon her second-generation Japanese heritage to subtly infuse ingredients like toasted hojicha green tea ice cream and kabocha puree into a Mexican tres leches cake or shiso into French profiteroles with sour cherry and sassafras. Meanwhile, Korean chef Junghyun “JP” Park breathes new life into sujeonggwa, a classic Korean cinnamon punch, served as a granita with unexpected pairings of burrata, walnut and yellow peach at Atoboy in New York.

“With dessert, there is a lot of leeway to be really creative and not be stuck in that authenticity Bermuda triangle,” Chou says. “Since nobody has a context for anything, including Chinese people, we just can say, ‘Yeah we can just try this out.’ It’s very liberating to not be bound to those traditions and make subtle references to things.”