A tandoor has no racks or dials; you operate it as if it were a volcano. So when the bakers at Tandoori Food & Bakery want to check the oven’s temperature, they reach into its yawning mouth and feel around.

“You know someone’s a baker if one of their arms has a lot less hair than the other,” Jacob Shalomov explains. “They do everything by feel.”

Fridays are rush hour for the Queens bakery and restaurant—customers have been dropping in all morning to buy lepyoshka loaves for Shabbat—and one baker is just loading the earthen tandoor with samsa. The meat pies, filled with beef and lamb, onion, garlic, and spices, get slapped on the tandoor’s walls. As the pastries cling for dear life, their lightly yeasted, hand-laminated dough puffs and crackles, while fat drips down, seasoning the oven and crusts to a burnished brown. It’s a balance: If the flame in the center is too ferocious, the samsa will burn before they cook through. If it’s too demure, they’ll lose their grip and fall into the fire.

“These guys have been doing this all their lives,” Shalomov notes. “They know it on instinct.” And they have to—they have 50,000 mouths to feed.

Neither Ashkenazi nor Sephardic, Bukharan Jews trace their heritage to Uzbekistan along the old Silk Road trade routes, especially the city of Bukhara. Like Jews everywhere, they built a cuisine out of the ingredients and traditions around them. Unlike Jews everywhere, that means hand-pulled noodles fragrant with lamb and cumin, spicy pickled cabbage salads descended from kimchi, and flame-licked breads baked in earthen tandoors.

“You know someone’s a baker if one of their arms has a lot less hair than the other. They do everything by feel.”

Jews are thought to have lived in Uzbekistan as far back as the 10th century BC, but after the fall of the Soviet Union, its Jewish population plummeted. With freshly opened borders and the specter of potential violence between the newly distinct Russian and Uzbek governments, most Uzbek Jews decamped for elsewhere. About 100,000 first- and second-generation immigrants live in Israel, but the second-largest community took residence in New York City, particularly the Queens neighborhoods of Rego Park, Forest Hills, and Kew Gardens. The area is so dense with Central Asian shops and restaurants that locals call it Rego Parkistan.

Meanwhile, only a few hundred Jews remain in Uzbekistan. Which means that at Tandoori, a samsa is more than just a samsa. It’s a critical act of preservation for a diaspora on new shores. 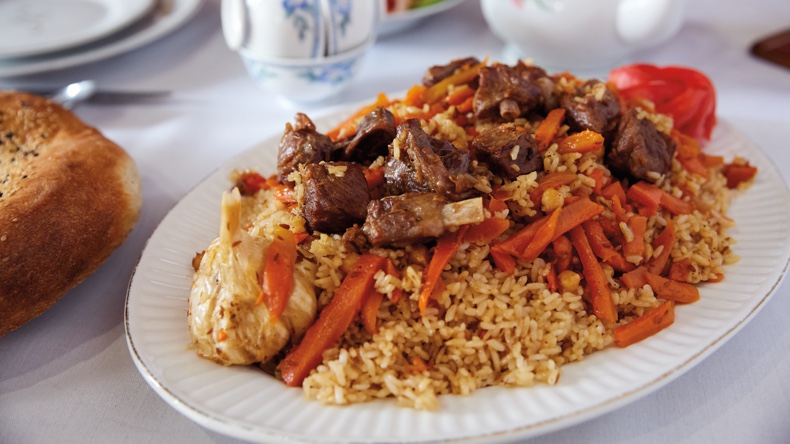 As a rack of lamb ribs sizzles in oil for a new pot of plov—a meaty rice pilaf festooned with spices, carrots, and chickpeas—Shalomov explains the family business. His father, Myren, opened the restaurant in 1998, initially as a stand-alone bakery, but as he developed a following, customers begged him to expand his menu to other Bukharan staples. Now Tandoori is a full-service kosher Bukharan restaurant, one of a dozen across the city. It’s a destination, especially for yushvo, the Bukharan-Jewish tradition of sharing a feast with loved ones on the anniversary of a family member’s death.

Plov is a yushvo essential, and one of Tandoori’s most popular dishes. Plov cook Akbar begins by frying onions until the oil turns mahogany and the onions shrivel, black and burnt. Like a Cajun roux, a Bukharan onion oil demands that you tempt fate, darkening it to the brink of inedible to build layers of flavor. The onions are then discarded and the searing begins: first the ribs, then tough cuts of lamb and beef cut into chunks, then fresh onions. Meanwhile, Akbar rinses medium-grain Calrose rice and soaks it in hot water to drive away surface starches and plump up the grains.

You make a plov like a biryani—that is, in layers. Once the meat and fresh onions are stewed to Akbar’s satisfaction, he spreads out carrots, chickpeas, cumin seeds, and a couple whole heads of garlic to stew together. Finally comes the rice, rinsed once again and tossed with salt and more cumin. Akbar pokes steam vents down to the bottom with the handle of a wooden spoon, the only maneuver remotely close to stirring before the rice is cooked. The finished pilaf tastes like dinner cooked in a spice market, heady and seductive with grains of rice lightly coated in onion oil.

Both plov and biryani are descendants of Persian pilafs that spread through Muslim trade and conquest. Like most cultural artifacts in that part of the world, it’s tricky to tell where one people’s food ends and another begins.

Historically, Uzbekistan’s Jews and Muslims have co-existed well. Akbar, for instance, is an Uzbek Muslim. Like most of the kitchen staff at Tandoori, he’s a more recent Central Asian immigrant who settled in Rego Parkistan with the help of inroads laid by the earlier wave of Bukharan Jews. As Boris Yusutov, a Jewish chef at the restaurant who came to the U.S. in 2004, puts it, “We were familiar with each other there, and we are here.” 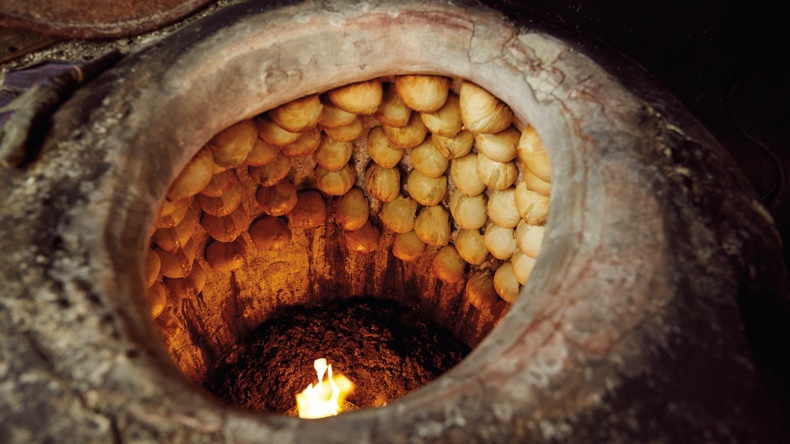 Food from the former USSR is enjoying a moment across America, from the constellation of Georgian restaurants in New York drawing crowds for cheesy khachapuri to the beloved Russian-Soviet restaurant Kachka in Portland, Ore. So far, the food of Uzbekistan and its Jews hasn’t made the same kind of waves. But the opportunity is there, and the country is ready for a seat at the Bukharan table. The question is, who will cook the meal?

And as Uzbekistan’s community of Jews dries up, it’s Muslims like Akbar that are building the new wave of Central Asian restaurants in New York. The city’s Bukharan Jewish community has assimilated into American life, and not many young people are interested in running restaurants. At 31, Jacob Shalomov is an exception. “My father built everything here with his own two hands,” he says as a point of pride. That is, everything except the hulking tandoor, a pyrogenic relic of the old country. And the call of the tandoor is too loud to ignore.​