In efforts to prevent laid-off hospitality workers and others in their communities from becoming food insecure during the COVID-19 pandemic, some chefs are turning to activism, mobilizing restaurants into community kitchens and finding other ways to give to those less fortunate—even when they're getting nothing in return

The idea is to bridge the gap between the lack of income today and the time when unemployment checks begin to arrive—which could take weeks—or until the government offers more widespread relief. Last week, Edward Lee transformed his restaurant 610 Magnolia into a community kitchen, spurring chefs across the country to join the LEE Initiative. Likewise, other chefs have started their own community kitchens or taken on other initiatives that support laid-off restaurant employees and food-insecure groups as well as overworked healthcare employees.

"We wanted to eliminate our perishable inventory and have it go towards good," explains Abe Conlon, chef/partner of Fat Rice in Chicago, of the decision he and his business partner, Adrienne Lo, made to turn their award-winning restaurant into a community kitchen. "Restaurants workers usually are eating family meal at work. They don't have a stocked pantry full of food at home. Now they don't have a secure paycheck."

On March 15, when Illinois Governor J.B. Pritzker ordered all restaurants to close for dine-in customers, Conlon and Lo realized they'd rather put perishable goods to use in cook-at-home kits good for two to three meals than to try to figure out takeout. Their team created around 20 new recipes by combining perishable ingredients they had available in ways that could safely be transported and finished at home; recipes included pork meatloaf with woodear mushrooms and stir-fried vegetables paired with tofu and tea eggs. The point of the boxes was not about inspiring people to cook the restaurant's signature dishes at home, but rather to help people feed themselves well and safely—and keep them home.

The prices were set on a pay-what-you-can model starting at 50 cents, giving options for staff and others in the community who risk becoming food secure. To keep the boxes going once perishable inventory is used up, Lo and Conlon rely on monetary donations from customers and food donations from vendors. Of the 400+ boxes they've served, 70 percent paid under $15 while 30 percent paid well over to support the cause.

"Doing this thing is not a business plan," Conlon says. "It's a way to service the community of need. Building this foundation for the continuation of healthy social distancing is the most responsible thing we can all do right now in an effort to limit the spread of COVID-19."

At just about the same time, Melissa Miranda, chef/owner of Musang in Seattle, transformed her less than three-month-old Filipino restaurant on March 16 into a community kitchen. Although her takeout business was strong before she cut it off, she felt it was more important to provide relief for out-of-work restaurant workers and help the Seattle area flatten the curve. The operation relies on donations of food and money to keep it going, and so far, the donations have come in. "We didn't think that we would have this big of a response, but it just showed that we needed to do this right now," she says. 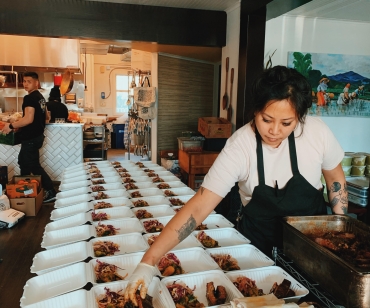 Joining Miranda are two employees prepping and cooking meals and organizing orders. They also pack ingredients for people who may not have staple foods at home. Orders are finalized in advance so Miranda can time the pick-ups ensuring not everyone arrives at once. All pick-ups are curbside to prevent anyone from entering the restaurant.

For Miranda, it's her way to contribute toward the larger efforts that are needed to support the restaurant industry in the wake of an unprecedented pandemic. "We need the government to acknowledge how big of a work force we are and how are they going to support over four million people losing their jobs due to this," she says. "I will keep working towards this—and people need to know that this is just a small part of what we need to look at."

Many of Jose Andres' Think Food Group restaurants—including Zaytinya, America Eats Tavern, Oyamel, Mercado Little Spain, and Jaleo—converted operations into community kitchens serving take-out at prices ranging from $3 to $7. The menu offers three to four dishes a day, such as soup, salad, a main course, and a drink. If someone comes and can't afford to pay, they get the meal free.

Before rolling the changes out, the team focused on safety. Orders are sold out of side doors, and signage enforces social distancing so that customers stand six feet apart in line. All interactions are touchless with a QR code, and the restaurant group is thinking through other ways to adapt to the realities of the pandemic.

"The way we're subsidizing the meals is that there's an option on the POS to pay it forward," explains Sam Bloch of Think Food Group and World Central Kitchen. In this way, customers can elect to buy their meal and someone else's to subsidize meals for those who can't afford them. The restaurant group also has continued its Think Family Fund, allowing employees to donate part of their paychecks to a fund that supports colleagues who are facing hard times. As things change, management adapts. "We're trying to find the best practices," Bloch says.

Other restaurants are donating meals in more of a grass-roots fashion. In Las Vegas, Restaurateur Elizabeth Blau of Honey Salt partnered with local organizations and Clark County to create Delivering with Dignity, a network of restaurants that can supply meals to low-income families in which grandparents caring for grandkids may not be able to get food at a food bank or grocery store. So far, the organization has served more than 800 meals.

At Insalata's in San Anselmo, Calif., Chef/Owner Heidi Krahling and her husband, Mark Krahling, are raising funds through a GoFundMe account so they can put their kitchen to work to produce meals for extrafood.org, a nonprofit that delivers food to food-insecure families and seniors. They will pay the overhead to operate and be able to retain a few employees to carry out the operation.

And in Chicago, The Fifty/50 Restaurant Group has joined the LEE Initiative to serve meals to unemployed restaurant workers at West Town Bakery & Diner, and additionally is serving 400 meals a day every day from 4:30-6pm to anyone in need of food at The Fifty/50 Sports Bar.

Meanwhile, at Sauce Pizzeria in New York City, customers ordering pizza can order an extra cheese pizza to be delivered to an area hospital. Like many of these programs, it’s something small that adds up in a big way to people who need the help.

Kate Leahy is a food writer and author based in San Francisco.