Seadon Shouse Recalls His Childhood Through Every Salt Harvest at Halifax

Seadon Shouse lives by the motto, “If you can do it yourself, why not?”

A few times a year, he and his wife drive three hours from their home in New York City to the furthest point of Montauk beach in the Hamptons. They collect mussels and periwinkles, and start a fire on the sand, away from prying eyes. They boil water for tea, enjoy their mollusk haul, and then hike for a while. But before heading home, Shouse walks knee-deep into the surf and pulls out 20 gallons of bracingly cold ocean water.

Back in the kitchen of Halifax, his Hoboken, N.J., restaurant, he starts the process of dehydrating water. A few weeks later, he’s rewarded with 15 cups of Montauk sea salt.

“What morphed into Halifax was the idea of local, seasonal, and coastal cuisine,” Shouse says of the restaurant named in honor of his Canadian home. “What’s more coastal than sea salt? I hadn’t made it before, but it was always a thought, [that] I’d get ocean water and figure it out.”

Shouse moved to New York from Louisville in 2011, where he’d been the opening executive chef at Proof on Main. There, he found wild ramps so abundant that he could forage a hundred pounds in only two hours. Before that, he worked in Florida and Nantucket, where he'd spend his two-hour break catching blue fish so plentiful he'd regularly serve them that night.

But Shouse says the greatest inspiration for Halifax came from growing up in a home so close to the ocean that storms would cast seaweed onto the roof. “Water would come up right to the foundation, or flood the greenhouse a few feet below ground,” he recalls. “There were big rocks in front of us, but in storms, it would just flood over.”

Shouse’s father slept in a tent for two years while building the family house in Halifax, toughing it out through deep Canadian winters and humid summers. When finished, the family used a hand-pump in place of running water, and chilled beverages in a stream. Only when his father later built a studio under a windmill—he was a potter, and Shouse’s mother a weaver—did they have enough electricity for lights.

“We got power on the grid when I was eight or nine because my father wanted a satellite dish,” Shouse jokes of the studio that became their second home. “There wasn’t enough power from the windmill. If we wanted to watch TV, we had to turn the lights off. It was either lights or TV.” 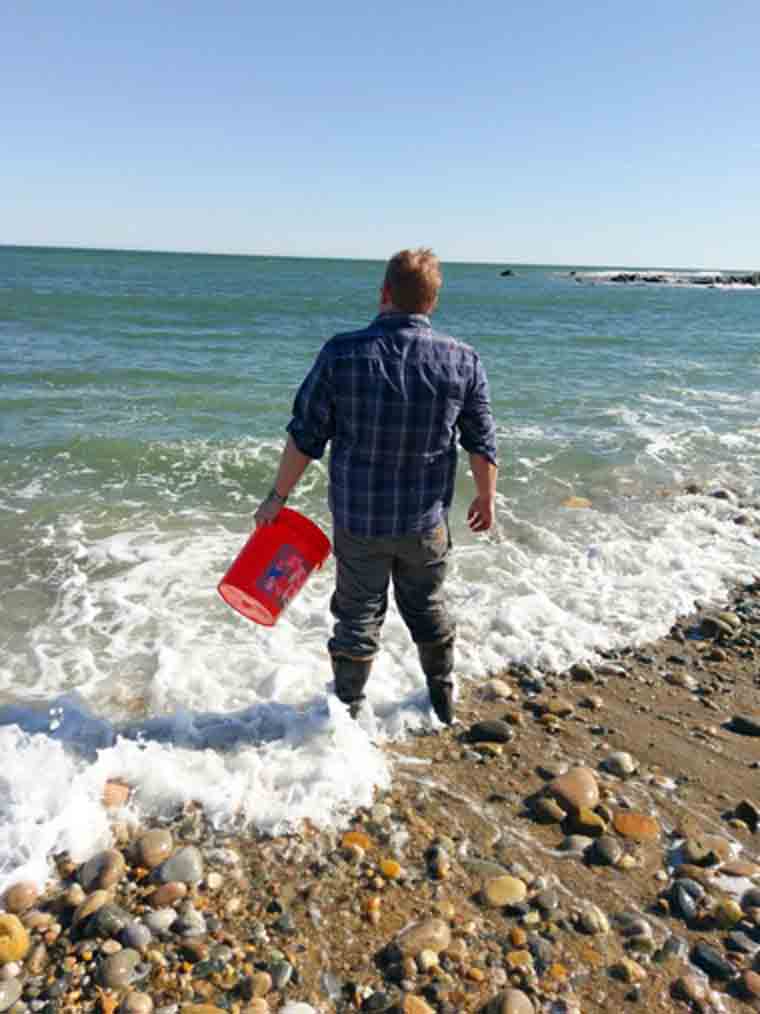 The parts of his childhood he now laughs about (a “pain in the butt”) also taught him an intense love for the land.

Shouse’s parents grew food in their gardens and greenhouse. Until he was five years old, the only milk he drank was from their goats. They collected cranberries from the bog, and picked “the best blueberries in the world,” in quantities “more than you could ever want,” he says. They collected mussels from the rocks, and set their rubber boat out on the waves to catch fish. When they weren’t fishing themselves, they’d order from fishermen who would leave buckets of the days’ catch on their doorstep, everything covered in seaweed to keep the shellfish alive.

“Growing up like that makes you appreciate not only what you have, but also the world around you,” Shouse reflects today.

At his restaurant, he buys products as locally and seasonally as possible. Until just a few weeks ago, he used local apples stored so well that they retained their crisp autumnal freshness. Often, the person who delivers his produce is the one who’s foraged for it. Now and then he’ll go out for his own mushrooms or sumac, too. And then, of course, there’s his new sea salt project, which he started about a year ago.

He first sent a sample of Montauk water to a food safety lab upstate: using it for personal use was one thing, but serving it to patrons another. Salt kills bacteria, so he wasn’t too worried, and the results proved it was completely safe. While some of his research suggested he air-dry the water from the crystals, a lack of rooftop space and threats from urban air-born pollutants made that approach unreasonable. Boiling the water to evaporate it seemed the simpler step.

But he quickly learned there’s more subtlety to salt than meets the fish’s eye.

He first sieves the 20 gallons through coffee filters into a 50-gallon kettle. Because he collects during calm tides and not directly where the surf meets the shore, not much sand comes home with him. The water filters quickly, separating out bits of seaweed and errant shrimp he tosses into the river outside Halifax’s expansive dining room windows. That kettle boils until the water is half reduced, then he transfers the remaining ten gallons to smaller pots.

For the next several days, those pots steam slowly, and crystals start collecting on the bottom and sides of the pots. He gently scrapes them off and stirs them back into the water, where they dissolve and collect again as the water continues to reduce. When cooks need the burners for service, he puts the pots aside.

“You have to go low for hours,” he explains, “probably around two-hundred-something degrees, so not a rolling boil. It’s enough to evaporate, but not that high.” Eventually, he’s left with a mound of thick crystals that he spreads on sheet pans. Those dry out over the course of several days until they are fully dry and ready to be gently crushed by hand. If he has the burner space and time, he can finish the 20 gallons in two weeks. Realistically, it takes closer to three. It then gets used only as a finishing salt on butter plated for bread service and on the ramp butter that tops his New York strip, so the 15 cups last around three months.

Coming up with his process took time; his first attempt didn’t yield perfection.

“I overcooked a lot of the first batch,” he admits. “It was dark—some burned—and you could taste it.” He hadn’t realized how easily salt could scorch (it’s not like chefs work regularly with such a concentration of salted water, as he points out). Since that lesson, he’s kept a sharper eye on the pots, stirring them frequently, and has turned out consistently whiter yields as a result, with a familiar flavor, but interesting texture.

“It’s hard to realistically say that it’s better than any other sea salt,” he admits. “It doesn’t taste like Montauk, or any different than a sea salt from Washington. The difference is the texture.” He crushes the crystals to a size so they offer textural variety on the palate but don’t feel like a “rock in your mouth when you chew." 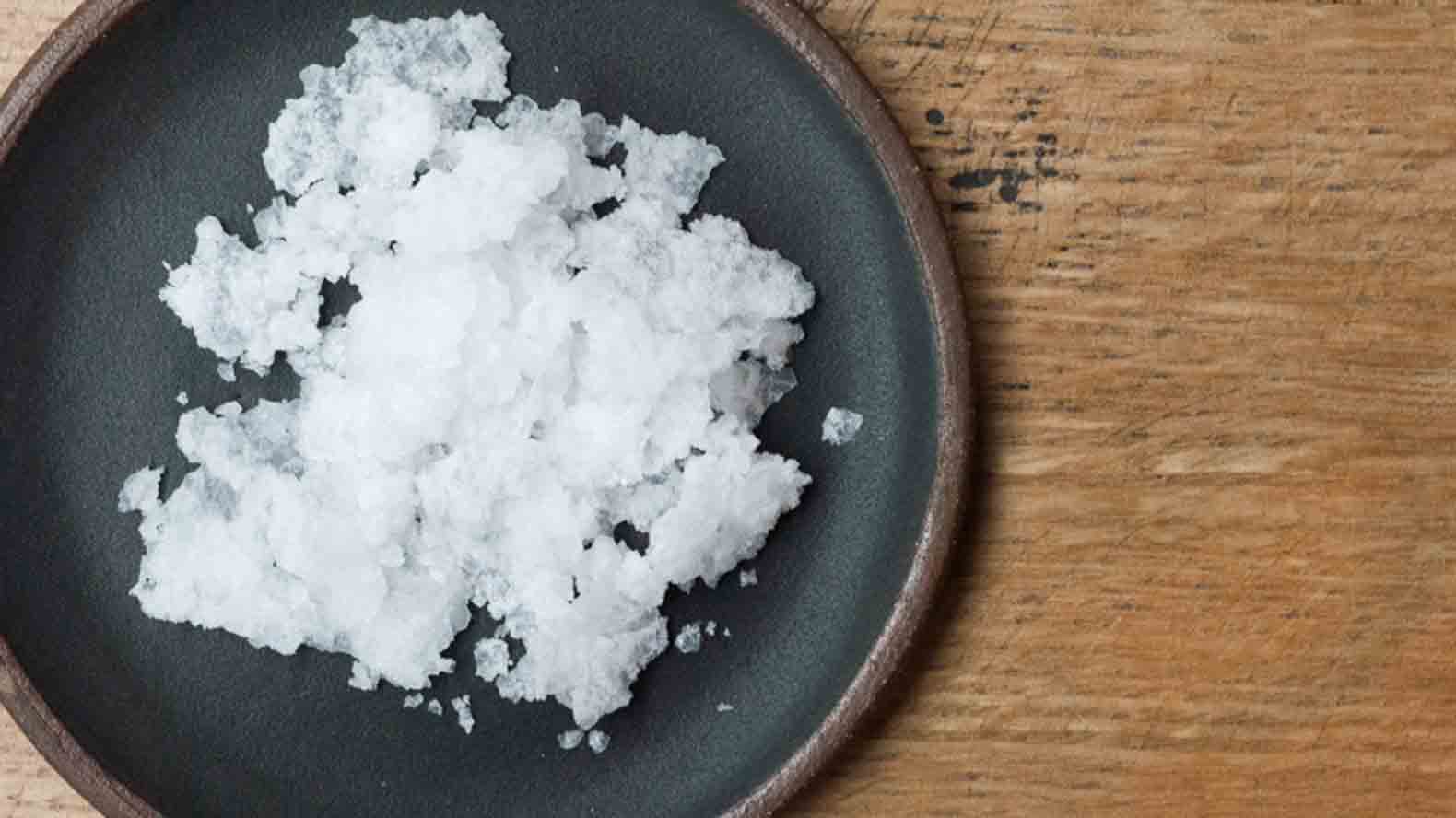 During a recent session, he realized that a thin layer of film forming on the surface of one of the pots was actually the salt. Instead of stirring to have it dissolve again he let it build, then gently skimmed it off the surface and set it to dry. The result was a light flake reminiscent of Maldon, with a unique crunch and eye-catching structure. It made up about a quarter of his total batch, and he hopes one day he can yield that flake entirely. “I think next time I’m going to do larger pots with more surface area, go it slow, and try to skim the whole thing,” he plots.

That experiment will wait until his next collection in autumn, since he worries about bacteria flourishing during hotter months. Until then, he’ll continue to craft the local, seasonal, coastal dishes that combine memories of Halifax with professional skill and his patrons’ New York sensibilities.

On one end of the menu, his maple-smoked salmon, his take on the jerky-like treat he can’t find elsewhere, is a love song to Nova Scotia. For his variation, wild-caught salmon belly gets hot-smoked with maple syrup, salt, and sugar until firm but not dry. It’s neither too sweet nor too salty, and kissed ever so gently with applewood smoke, pairing exceptionally well with a dab of Dijon and a swallow of crisp white wine.

On the opposite end sits that herb-rubbed New York strip. The Pennsylvania-sourced beef is served with mushroom mashed potatoes, shoestring sunchokes, and that salt-kissed ramp butter, altogether decadent without crossing into over-rich territory. Growing up by the sea, Shouse never ate much meat, but the sunchokes now remind him of home, too; his mother planted their septic field with the tough-rooted bulbs when he was younger, and while he didn’t know what lay beneath the surface as a child, he remembers joyfully knocking through the aboveground flowers while playing in the field.

“Foraging for mushrooms, getting sea beans, and being outside in nature... I really enjoy the sustainability of all that,” he says of his two worlds coming together at Halifax. But the core of why he spends weeks lugging, filtering, boiling, and evaporating water into salt?

“The easy answer is: Because you can!”