Marcelle Afram has become one of Washington, D.C.’s most beloved chefs, first gaining notoriety at the popular brewpub Bluejacket and later as executive chef of the Michelin-starred Maydan. But despite those professional successes, Afram struggled with depression and alcoholism that was exacerbated when the pandemic hit. A lifetime of soul-searching culminated in Afram publicly coming out as non-binary transmasculine last summer, an announcement that allowed them to finally connect their personal identity with the chef persona the public had come to know.

“It’s taken 35 years for me to understand this about myself,” Afram explains. “I was just in such a dark place and really coming to terms with myself…I felt like I was missing out my whole life.”

As the oldest of four sisters growing up in suburban Maryland within a Syriac (tribe of Assyrian people) family, Afram struggled with identity from the age of four. “The things I wanted to emulate or that I was attracted to were definitely masculine,” they recall. Afram preferred boys clothing, but their parents made them dress in feminine outfits, grow their hair long, and wear makeup. When Afram was finishing high school, their parents began seeking suitors from their church in the hopes that they would have a proposal of marriage by the time they were 18. Afram wasn’t interested and was kicked out of the house, with nothing but a car and some clothing. “The first thing I did was cut off my hair and take off my bra in the Walmart parking lot in Laurel, Md.,” they say. “From there, it was like my exploration into myself and how I wanted to present myself to the world.”

Having worked in restaurants owned by their family since the age of 10, Afram found a job as a food runner. They later worked as a janitor on a cruise ship in Alaska, which fueled an interest in exploring cuisines around the world.

“I really just threw myself into food,” they explain. “[We] didn’t have the internet back then, so I would go to Barnes & Noble and sit in the recipe and cookbook section and read book after book. I immersed myself in food and understanding it and I fell in love.” 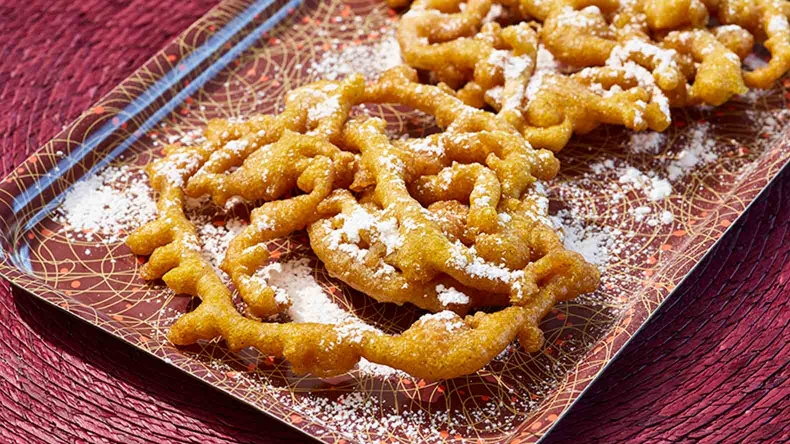 Afram saved money while working as a fry cook and went to Spain, hoping to work at a Michelin-starred restaurant. After landing an unpaid stage role, “I hated it,” they say. “It was so misogynistic and militaristic.” Afram instead leveraged the friendships they had made with purveyors, and got a job working on a fishing boat off the coast of Majorca.

But Spain was a learning experience for Afram for personal reasons as well as culinary. “The thing that really stood out for me about Spain was how differently masculinity is defined,” they explain. “The clothing was tighter. The camaraderie among men was different. I definitely felt like I was finding my way...it was the first real expression of wearing clothes and finding myself in the way I was presenting myself.” Afram adopted some of these mannerisms and began presenting themselves in more masculine ways. But when people initially identified Afram as male, their initial sense of comfort was followed by self-loathing. “It made me ashamed,” they say.

Afram then began describing themself as queer while retaining their female pronouns. “The only pretext I knew was based on sexuality and gender, so I thought that described me as lesbian,” they explain. While working at several prominent Washington, D.C. restaurants, they continued to present themselves outwardly as more masculine, and saw the impact of that decision in the kitchen. “I saw my feminine-presenting colleagues being treated differently than I was. There was a certain privilege in the way that I was presenting myself in that men treated me differently.”

Despite this, Afram faced frequent and persistent sexual harassment.

“Cisgendered men would sometimes think that I could be a part of banter that I was never comfortable with,” Afram says, adding that men in kitchens would often make openly lewd comments about what they could do for them from a sexual standpoint. “I don’t know if there’s been a kitchen I've been in where that hasn’t happened,” Afram notes. At one point in their career, a male colleague harassed Afram to the point where Afram threw him against the wall and told him to leave them alone.

Even so, Afram felt a sense of belonging in kitchens. “It was an easy way to throw myself into something, because masochism is so wholly accepted in the industry,” they say. “You have all these feelings and you’re working through them with all of these conditions that are really horrible. There’s a sense of solace. It’s like playing a sport or working out. You let out all your aggression in what you’re doing. The physicality of working in a kitchen gave [me] a sense of relief.”

Over the years, Afram found love with their now wife and reconciled with their family. Meanwhile, they worked their way up in kitchens to chef positions. Still, the sense of depression and discomfort within their own skin lingered. “I was always doing these things that were women-led, women-forward and I always felt kind of guilty about it,” they say of that time. “I just went along with it.” Afram tried to rationalize that their presence in these spaces was a way to open more doors for women in the industry, even if it felt worse for them personally. “It was terrifying and really scary,” they say. “I went down a rabbit hole [of] depression, anger, and self-loathing because I didn’t know what to admit to myself.”

After years of research and support from their wife and son, Afram began to understand the spectrum of gender, where one can identify as non-binary and embody aspects of both femininity and masculinity. These revelations, which have been a part of science for centuries but are severely repressed in society, offered Afram hope. “Gender is so complicated but, holy crap, there’s a box for me!” Afram tearfully exults. When they made the decision to come out, it was to help others as much as it was to finally be true to themself. “If little Marcelle had this option...That I could be like this? That would have changed my life,” they say. “I was such a sad kid.”

Afram decided to be publicly transparent about their choices to undergo hormone therapy and top surgery. “I know I have a platform. It’s small but it’s there and I knew that I had to share and create some advocacy around [my journey]. If [I] could help one person, that would make it worth it.”

They got an overwhelmingly positive response and soon discovered a community of trans restaurant-industry professionals, many of whom have not come out.

Afram is now a strong advocate of the trans community in restaurants. “There is no right or wrong way to be trans,” they assert. “You don’t have to be going through hormone therapy or going through a transition. It’s whatever the person chooses for themselves. Trans joy and affirmation to me is about the human aspect of our existence. In its core it’s about being our truth.”

Last December, Afram left Maydan to open their own venture, Shababi: Palestinian Rotisserie Chicken. It’s an opportunity to unite their personal and professional exploration in one place, a significant step forward in continuation of what they started in that Walmart parking lot so many years ago. Afram is ready to create an environment that celebrates food, where it comes from, and the people who are responsible for it. “Whether it’s the Palestinian aspect of it or my trans aspect of it, I have so much fuel for my fire right now...I just want there to be visibility for all these sectors of humanity that have been marginalized.”

How to support the trans community in your restaurant

There are very few federal workplace protections for the transgender community, so it is up to individual businesses to make their workplaces safer for trans employees. “Employers should not make assumptions and not be overly intrusive,” Afram says. “But just as they should with all their employees, give neutral space for a person to be able to speak about what they feel like they might need from the workspace.” Here are a few other suggestions:

To learn more about how to support the trans community, visit www.transequality.org